The Throwing Direction Drill encourages players to continue forward with the momentum of the throw rather than falling back as they generally do when a drill requires them to simply go to the back of the line.  Following forward is important in throwing because i facilitates the follow through which is critical for a good throw that gets to where the thrower intended it to rather than a slow ball that does not necessarily get to the target.

Have the players line up in two single lines that face each other.  One player behind the other player.  Put the lines the distance apart that would be best for success depending on the age and experience of the players.  You can use cones to give the players a visual of where they are supposed to stand or set up for the drill.  Put a marker at the front of the line so that the players do not inch closer as the drill progresses.  This will also make it easier as the players simply move one cone ahead as they progress through the drill and become the player at the front.

This drill works well for young and inexperienced players because it encourages them to follow through on their throw.  Although this drill can also be used to introduce stress by adding 2 more lines as noted in other drills, and making it a competition, be sure to have them focus on the follow through and moving forward after the throw.

You can also use it for fielders and having players move to the ball, field it and then throw it after fielding the ball.

Be Sure to place the cones so that the players do not run into or over them. 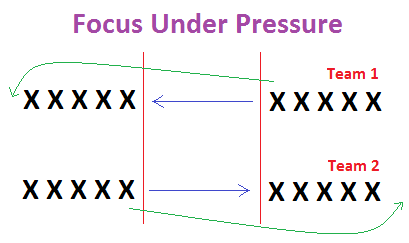