There has been much discussion about the use of the softball face mask dilemma. There are some that feel perhaps it does not make the infielder tough enough and some that feel it is just not part of the game.  There are others like myself who feel that any piece of equipment that can prevent a long term injury, has to be a good thing.

I am also one of those that believe it is a critical part of the game if it makes the fielder and especially the pitcher feel safer and more comfortable on the field. Think about how the game has changed since even 10 years ago, there are a few factors that have advanced since then.

Though there are many reasons to where a mask, the thought of some is that the player who wears one is afraid of the ball so she could not possibly be good enough to play at the highest levels.    I feel that this opinion is old school and even though I respect everyone’s opinion, they too should respect the desire’s of players to be safe and feel more confident on the field.  Would we ask a hockey goalie not to wear a goalie mask and helmet?  Even though back in the day they didn’t wear them, we could not even think of asking them not to wear one now. 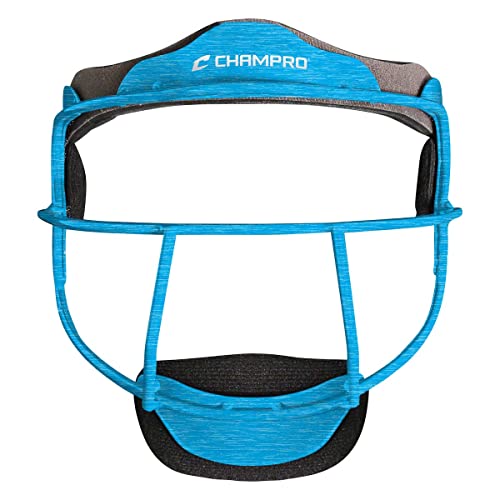 The idea of a mask inhibiting a players ability to field and throw is an easy statement to make.  Just look at the way that the softball face mask covers the face, one might wonder how does the player see the ball through those bars.  If a player has practiced with the mask and has worn one for a while, they know their “blind spots” and will have no trouble fielding the ball and seeing where to throw it.

Much of the motion of fielding is done through muscle memory and the muscles will simply react and do what they know how to do.  If you consider a tennis player.  do they look at the head of the racquet when they return a serve or a volley? Not most of the time.  They know where the head of the racquet is and simply react based on their muscle memory.  This is not any different.  An experienced softball player knows exactly where her glove is kinesthetically and can respond to the ball just as well as a player who is not wearing a mask.

A third baseman who plays in the “hot corner” is even closer to the batter than the pitcher when expecting a bunt.  What happens when it is a fake bunt that turns into a line drive.  We do not need to discuss the potential of injury in that situation and yes it has happened.  Yes, good reaction time is a quality of a good third baseman, but softball is only a part of their lives not to mention the fact that getting hit in the head and especially the face is very painful and can affect the player’s future just as much if not more compared with the rest of the body.

According to a concussion study from Headcase,  there were 16 head injuries per 100,000 players in softball in 2012. The total number of concussions had doubled during that year since 2002.   I would predict that the reason for those changes is the improvement of both equipment and training.  A study by the American Association of Neurological Surgeons reported that in baseball and softball 38,394 head injuries were reported in emergency rooms in 2009.

We must not forget the importance of mouth guards in this discussion about softball face mask dilemma.  What many do not know is that they not only protect the teeth but they also decrease the chances of concussion by helping to keep the jaw in place during contact with the ball or another player.

A coach must however be careful about mandating face masks for their players if their association or league do not have a position on them.  If a player is injured as a result of wearing a face mask and it is not of the regulations that you play under, there could be liability involved.  You can however show statistics and give information regarding the safety of wearing them if you would like them to.  Then the decision is up to the player and their parents. So, you can recommend but not mandate them on your team if the governing body does not regulate them.