The short fly ball is sometimes one of the hardest ones to judge for outfielder and infielders but for different reasons.  It can be over run easily by outfielders and there can be a lot of confusion for infielders if there is not enough communication or tactical rules set for them.  A ball that is hit between the infield and the outfield for example should be caught by an outfielder who judges it correctly and gets a good jump on it.  What often happens though is an infielder backpedals and tries to catch it.  When it works the fielder is amazing.  But it doesn’t always work.  If the outfielder fields the catchable ball, there is a better chance at a play after the catch because she is moving forward already and her momentum can take her into a throw.

Depending on the number of outs, if there are runners on base and where they are, the fielder will need to either hold the ball or transition to a play right after.  Knowing the game situation is critical to the success of this play.    Not only because it will be caught but also because it might be dropped which means something definitely needs to happen after it hits the ground.

If the ball is to be caught in the air, regular fly ball rules apply.  This means having the glove at about shoulder height with the glove on the throwing side of the body for a good transition to throwing.  If there is no need for a throw after because no one is on base or the ball is caught near the base where a runner is, it can be caught in a more comfortable position with a focus on keeping it in her glove.  It just needs to be caught. 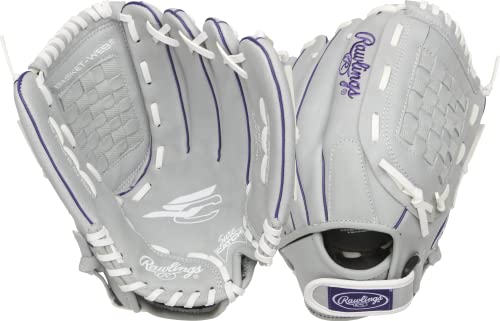 If the ball is caught in front of the player who is moving to the ball quickly, a basket catch can be used.  This is where the glove might be at waist height with palm facing up as the ball lands inside it. Inexperienced players will tend to squish their elbows and shoulders in front of them as they are catching it because they might be scared of getting hurt or scared of dropping the ball.  With lots of practice they can gain the confidence needed to catch it with ease.

It’s very important as with any fielding, that the player keep her glove open and eyes on the ball as she fields it.   Sometimes players will look up if they know there are runners moving.  Unless she knows her glove very well, she could lose sight of the ball and have it land on the dirt.  If the ball does fall to the ground, she still needs to keep her eyes on it until it is in the glove.  Then a play can be made if there is one.  It would then be fielded as a slow roller.

The biggest obstacle for infielders on a short fly ball is traffic, or the amount of players in the immediate area who can catch it.  This is why communication and an order of priority can be important.  This gives the fielder the confidence to go for the ball.  Often with inexperienced players, as soon as they see a team mate moving towards the ball they either hold up or slow down.  The trouble with that is, so does the other player.  so by calling the ball by the fielder’s name or giving to an established rule around fly balls, it is way more likely to be caught for an out.

The success of the outfielder on the short fly ball depends on anticipation and getting a good jump on it after it leaves the bat.  This is why being more on the balls of the feet and in a good ready position is important.  A player on her heels in the outfield will be delayed enough in her movement to the ball that it has a better chance of dropping in front of her.  It is also important for her to call off the infielder right away if she is going to get it so that she can charge in and catch it without worrying about a collision.  If there is any hesitation by the outfielder, she might see the ball drop in front of her and the infielder scrambling to get to it.  By keeping the speed up to the ball, she can run through it and catch it on the go and be ready for the next play if needed.

Coaches practice fly balls often with their teams.  It is important to put them in situations where the short fly ball often happens.  The following are common situations to practice: